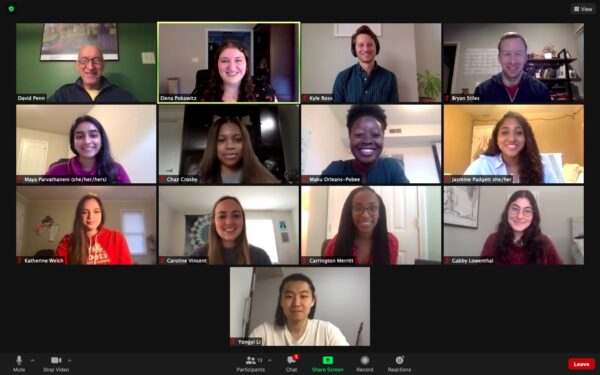 Maku was born in New Zealand but grew up in Northern Virginia, near Washington, D.C. She attended the College of William and Mary, where she majored in psychology and also studied computer science. As an undergraduate, she worked as a research assistant in a multiple different labs, working on various studies involving both human and animal subjects. She completed an honors thesis investigating fear conditioning and personality pathology. However, after assisting with a project examining cognitive functioning in schizotypy, she realized that her research interests relate primarily to schizophrenia spectrum disorders. She is excited to join the Penn lab and to begin researching psychosocial interventions for schizophrenia, potentially focusing on treatments for first episode psychosis, or on early intervention. In her free time, she enjoys dance, traveling, and finding new places to eat good food.

Carrington was born and raised in Charlotte, NC. She graduated from the University of North Carolina at Chapel Hill with a major in psychology and minors in neuroscience and social and economic justice. As an undergraduate, she served as an RA in the Penn Lab while also working in the Social Neuroscience and Health Lab of Dr. Keely Muscatell. As an RA in the Penn Lab, Carrington assisted with projects investigating how contextual factors such as experimenter race interact with physiological mechanisms to contribute to racial disparities in performance on neuro- and social cognitive batteries that are highly predictive of functional outcomes in schizophrenia. She also worked on a study designed to improve physical health and fitness among individuals with schizophrenia by leading weekly walking groups with study participants. Carrington’s research interests are focused on how social conditions influence neural, physiological, and psychological functioning, and thus contribute to the onset, course, and treatment of severe mental illness, specifically schizophrenia.  For fun, Carrington enjoys running, teaching group fitness classes at UNC Campus Rec, and having movie nights with her roommates.

Bryan grew up in Olympia, WA. He graduated in 2011 from Pacific Lutheran University in Tacoma, WA with a B.A. in religion and simultaneously commissioned into the U.S. Army Reserve. Desiring to learn more about psychology, he completed post-baccalaureate coursework at the University of Washington (UW). As a student intern and then research assistant, Bryan worked on several clinical trials evaluating interventions with populations at high-risk for suicide. Particularly interested in the recovery stories of individuals with serious mental illnesses, Bryan transitioned to work with Dr. Maria Monroe-DeVita at the UW. He coordinated the implementation of evidence-based practices for adults with schizophrenia spectrum disorders, namely Washington State’s early intervention program for first episode psychosis (New Journeys). Bryan’s research interests include the development and implementation of recovery-oriented best practices for persons experiencing early psychosis and their caregivers – particularly in underserved communities. Outside of the Penn lab, he loves road bicycling, kayaking, drinking coffee, baking, and relaxing with his cat Benny.

Kyle is a New York native. He earned his BA in English, minoring in Health & Wellness Studies at SUNY Binghamton in upstate New York. After working in a New Jersey school district for two years promoting health and wellness, he decided to head back to school and pursue his passion in psychology and mental health. He completed a Psychology Post-Bac at Columbia University where he studied relationships and social support in the CU Couples Lab. Now he works as a part-time Research Assistant in the Penn Lab for the PACE-Life and Horyzons studies. He hopes to pursue a career in clinical psychology and enter a graduate program in the near future. When he isn’t working he enjoys walking his pup, golfing, hiking, and writing.

Elena grew up right down the road from UNC in Raleigh, North Carolina. She graduated from Vanderbilt University in both 2019 and 2020, earning a B.S. in cognitive studies and child development and an M.Ed. in clinical and developmental research. Throughout her time at Vanderbilt, Elena worked with Dr. Jeannette Mancilla-Martinez in studying the language development and self-efficacy of Spanish-English elementary-aged dual language learners. After years of working with children across the spectrum of ability, Elena has decided to pursue a career in clinical psychology. With a strong interest in early intervention and lifetime care, Elena is excited to be joining the Penn lab in order to work with patients who have experienced their first episode of psychosis. In her free time, she likes to experiment with new recipes, play the violin, and volunteer at the local food bank. Gabby grew up in West Bloomfield, MI. She graduated from the University of Michigan earning a B.A in Psychology with a minor in Criminal Justice in 2019, and a M.S. in Psychology in 2020. At the University of Michigan, Gabby worked with the Michigan Psychoneuroendocrinology Affective Laboratory studying early predictors of the first depressive episode in adolescents with a history of familial depression. Following graduation, Gabby spent the summer volunteering with a local nonprofit providing housing and mental health services to previously incarcerated men. Now, she is excited to be joining the Penn Lab to further pursue her passion with research. Outside of the lab, Gabby enjoys hanging with her pets, running, and camping.

Kate is a senior double majoring in Biology and Psychology with a minor in Chemistry. This is her third year in the lab, and she is working on the author-race study as well as completing her Honors Thesis looking at the use of daily diaries in first-episode psychosis. She is passionate about clinical psychology research and will be attending medical school after her undergraduate career. In her free time, Kate enjoys volunteering with free healthcare clinics in rural North Carolina.

Maya is a senior at UNC Chapel Hill majoring in psychology and minoring in studio art and chemistry. She joined the Penn Lab in the Spring of 2019 and has worked on the BASS research study. Maya hopes to go on to medical school after graduation to become a pediatric oncologist. Chaz is a junior at Chapel Hill majoring in psychology and minoring in chemistry. She joined the Penn Lab in spring of 2019 with a strong interest in mental health disparities. She has worked on the BASS research study and the author-race research study. In the future, Chaz plans on going to medical school to become a physician. Jasmine is a junior majoring in Psychology and minoring in Cognitive Science. Jasmine joined the Penn lab in the Spring of 2019 and is interested in minority mental health and clinical psychology. In the future, Jasmine looks forward to studying evidence-based therapies for people of color and working in clinical settings. In her free time, Jasmine likes to stay active outdoors and visit her favorite local coffee shops! Caroline Vincent is a third year Undergraduate of the University of North Carolina at Chapel Hill. Caroline is majoring in Psychology and minoring in Computer Science and Neuroscience, and is a research assistant in the MECCA and Penn labs. Caroline is also the President of the UNC chapter of HGAPS. During her time working in the Penn Lab, Caroline has worked on the BASS study, the author-race project, and the PACE-Life study. Yongyi is a sophomore double majoring in Biology and Neuroscience at UNC. He joined the Penn Lab in the Fall of 2020 because of his broad interest in neurological disorders. Specifically, he wants to learn more about the various types of treatments available for these disorders, as well as how we can apply cutting-edge biotech to developing new treatments. In his free time, Yongyi likes to play his bass guitar, play badminton, and just spend time with his friends.